* In case of any delay in receiving the OTP, you may verify it later. Please proceed without verification.

Enter your City name or Pincode

Devprayag is considered the holiest of all the five confluences or Panch Prayag in Devbhoomi Uttarakhand. Located 70 kilometers away from Rishikesh, Devprayag is the last point of confluence for Alaknanda River with River Bhagirathi before it descends into the northern plains rechristened as holy River Ganga. Devprayag is a holy town and Nagar Panchayat in Tehri Garhwal district of Uttarakhand off Rishikesh- Badarinath Highway. Devprayag roughly translates into ’Godly Confluence’ as the Sanskrit meaning of Devprayag is DEV= God/Godly + Prayag= Meeting/Confluence. 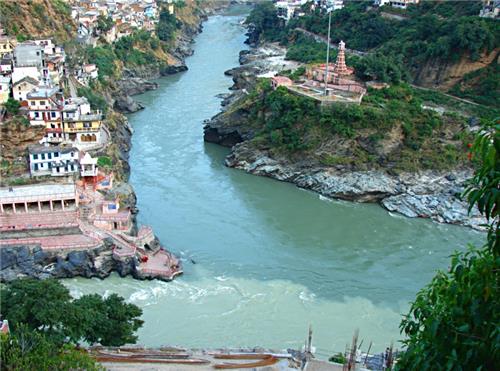 According to mythology, the presence and confluence of another mythical river Saraswati along with these two rivers at Devprayag is also highly revered by devotees and local residents. River Saraswati originates from the base of Shri Raghunathji of Raghunathji Temple in Devprayag.

According to legend, it is considered that Devprayag got its name from sage Devsharma who led an ascetic life in the region spending his days in mediation in search of God. It is believed he got a glance at the almighty who blessed him and thus Devprayag received its name. Devprayag is a sacred point for Hindu devotees as the two holy rivers Alaknanda and Bhagirathi merge in the region as well as for the temple of Raghunathji dating back ten thousand years being constructed by giant loose stones and rocks on a tableland in the village of Raghunathji.

According to folklore, Lord Rama and his father King Dashrath are believed to have conducted penance in Devprayag for quite some time. It is also the seat or hometown of Badarinath priests known as ‘Pandas’ who spent 2-3 months in Devprayag when the temple of Badarinath is closed. Adjacent to the confluence are the lingams of Tondeshwar and Dhaneshwar Mahadev.

Located at an altitude of 830 meters above sea level, Devprayag is posited at an angle of 30.146315° N 78.598251° E.  Devprayag’s scenic beauty is breathtaking as the region is flanked by Dashrathanchal Parvat, Giddhanchal Parvat and Narsinghanchal Parvat on three sides. 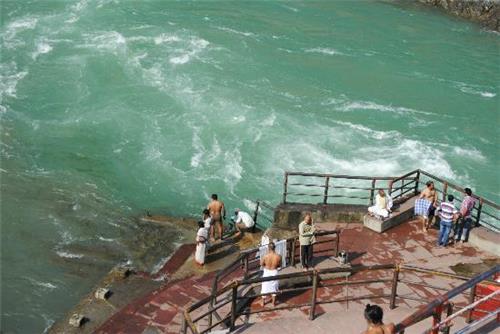 The weather of Devprayag is temperate with heavy rainfall during monsoon when the roads become flooded and blocked by landslides. The falsh floods of  2013 wreaked heavy damage to the roads and entire region in Devprayag.

On a trip to Devprayag, a visit to Raghunathji Temple is highly recommended as the temple is ten thousand years old erected from massive rocks and stones over a tableland in a village on the upper part of the town. The temple shaped in the form of a pyramid with white cupola and a golden ball with a spire is dedicated to Lord Rama who performed self mortification at Devprayag. At Rama Kund located close to the temple, Lord Rama’s footprints are preserved and worshipped by residents and devotees.  River Saraswati is considered to have originated in Devprayag from Raghunathji’s feet before it merges with the other two rivers. Within the premises of Raghunathji Temple, temples of Lord Hanuman, Garud,  Annapurna and Shankaracharya are also housed.

At the confluence points of the two rivers, two basins namely Brahma Kund on River Bhagirathi and Vashisht Kund on River Alaknanda are revered by devotees to wash away their sins.

The region in Baitalshila in Devprayag is considered as holy because it is believed by locals that a bath or dip in the river here can cure leprosy.

Visit to Chandrabadni Temple is also worthy on a trip to Devprayag as it is considered as one of the ‘Peeths’ (51 Peeths where Goddess Sati’s body parts are scattered across India) where Goddess Sati’s torso alighted when Lord Shiva was carrying her on his shoulders in an enraged avatar.

Dahsrathshala Peak/Rock in Devprayag is dedicated to King Dashrath who performed penance in the region and located very close to this spot is a small stream like formation dedicated to the king’s daughter Shanta which descends from the peak considered sacred. 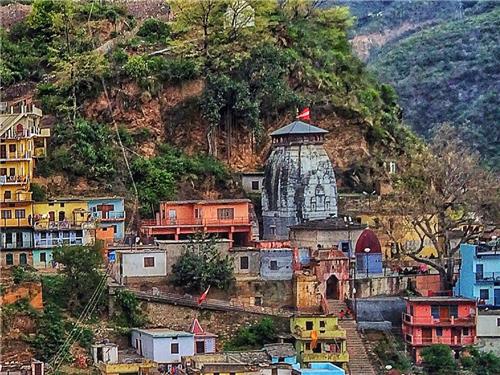 Besides, the natural beauty of Devprayag with the snow capped peaks of Himalayas make a heavenly sight which attracts tourists in numbers all year round to this region.

Devprayag’s climate is favorable all year round making it suitable for visit at all times; however it is advisable to avoid visiting the area during monsoon.

How to Reach Devprayag

Devprayag is also connected via NH 58 with Delhi, Badarinath and Mana Pass near Indo-Tibet border in Uttarakhand. Devprayag lies on NH 58 enroute Badarinath from Delhi through Haridwar and Rishikesh via Joshimath. Regular buses and private taxis ply from Rishikesh to Devprayag.

Distance of Devprayag from Major Cities and Towns

Two suspension bridges, namely erected on river Alaknanda and Bhagirathi in Devprayag offer spectacular view of the region. The confluence of the two rivers from the two bridges looks divine.

Kyunkaleshwar Mahadev Temple built in 8th Century by Adi Shankaracharya in Pauri Garhwal district of Devprayag is a revered shrine. Lord Shiva with his companion Goddess Parvati resides within the temple along with deities of Kartikeya and Ganapati. The temple offers stupendous views of Alaknanda valley along with the snow covered Himalayan peaks in the backdrop. The temple comes alive during Mahashivratri.

Agrakhal village in Tehri Garhwal district of Uttarakhand off State Highway is famous for the panoramic view of Gauri Danda peak offered from the region at an elevation of 1820 meters.

Karnaprayag located close to Devprayag is also famous for being one of the Panch Prayag or river confluences with Karna Temple and Uma Devi Temple as notable religious spots.

Devprayag has a police Chauki and medical stores to deal with basic emergencies but the town does not have a fire station or an ambulance service or blood banks.

Devprayag does not have a government hospital and locals need to visit Srinagar, Pauri Garhwal and Rishikesh to access advanced healthcare facilities.

Utilities and Services in Devprayag

Devprayag offers some basic public services to its residents, although it cannot offer some other utilities to them for which they need to visit other areas to avail these public services:

Given below is a list of utilities and services:

Comments / Discussion Board - About Devprayag